Deathtrap Dungeon refers to several labyrinths created by Baron Sukumvit for his Trial of Champions.

Deathtrap Dungeon isn't so much a classic labyrinth as a network of tunnels leading deep into the hills near Fang. They are commonly riddled with deadly traps, some of them rather sadistic, as befits the nature of its designer, such as a room with a descending ceiling which crushes its captives, a veiled cage housing a Medusa, or a distortion mirror which would warp the body of any viewer according to its shown reflection, leading to the viewer's death.

Among the most common features in any version of Deathtrap Dungeon was the installment of so-called Trial Masters in the labyrinth's middle and end sections who would determine whether a contestant passing their station was worthy to continue or not. The finding and recovery of a number of key artefacts and clues was also important for unlocking the doors at the end of the dungeon; in the first version these were various gemstones (an emerald, a sapphire and a diamond, in the second dungeon, a set of nine identical gold rings.

The first Deathtrap Dungeon was opened on Seaday the 21st of Watching in 274 AC, on the occasion of Baron Sukumvit's 40th birthday.[1] Sukumvit had designed the dungeon both to offer Fang a unique tourist attraction as well as satisfying his own penchant for sadism without needlessly victimizing or antagonizing his subjects.[2] Upon completion, the labyrinth was tested by Sukumvit having fifteen of his own bodyguards sent into the dungeon; none of them returned. This solidified the notoriety of the dungeon and ensured its reputation as the "ultimate challenge" for the adventurous. Once a year, the Dungeon would be opened to admit a number of brave (or foolish) champions who hoped to win the substantial price of 10,000 Gold Pieces. One of these, Mungo's father, was from Oyster Bay.[3] This challenge would eventually be nicknamed "The Walk."[4]

On Seaday the 1st of Winds, 283 AC, six contestants entered the Dungeon: two fur-clad Barbarians (one of whom was called Throm) armed with long, double-headed axes, a sleek Elven woman, a Knight covered head to toe in plate armour, a black-robed Ninja, and an adventurer dressed in leather armour.[5]

The only one of these contestants to survive was the adventurer in leather armour, who became the first ever person to survive the Dungeon and win Baron Sukumvit's prize of 10,000 GP. The other contestants all died in the Dungeon: the Knight was turned to stone, the Elven woman was killed by a Boa Constrictor, one of the Barbarians died in a spike-trap, while the other Barbarian (Throm) and the Ninja were killed by the Champion of the Labyrinth - albeit in self-defense.[6]

Baron Sukumvit did not take the defeat of his Dungeon nor, more importantly perhaps, the loss of 10,000 GP very well at all. He hired a Gumar Hunter, under the supervision of Jaiphrai Ah'cha, to track down and kill the "Champion" at the tower of Badedas the Blue.[7]

Such is the fame of the Dungeon that it is known to those who live in north-west Khul,[8] and perhaps the whole of Khul.

A year after the Champion of the Labyrinth defeated the first Deathtrap Dungeon, Baron Sukumvit opened the newly redesigned second Deathtrap Dungeon, offering a spectacular prize of 20,000 GP to anyone who could get through it.[9]

Five contestants entered the second Dungeon on Seaday the 1st of Winds in 284 AC: a Chaos Champion wearing spiked armour, an Eastern Warlord dressed in traditional battle armour, an Elven Prince, a Dwarf Noble, and a slave from Lord Carnuss's Arena of Death.[10]

Lord Carnuss's slave defeated the second Deathtrap Dungeon,[11]and used the price money to raise an army against a dark threat rising in the Moonstone Hills.

A chair in the form a fiendish bird within the dungeon.

A statue with gemstone eyes flanked by two flying guardians.

A chest found within the first Deathtrap Dungeon.

A skull upon a column, with two wooden balls on the floor.

A room with a cage draped with a cloth, concealing something.

The corpse of an equipped warrior, a diamond lying slightly nearby.

A beam of light full of laughing faces inside the dungeon.

The final door of the dungeon, with Igbut the trialmaster in front.

An ornate helmet on side of a chasm, a thin rope the only way across. 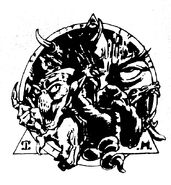 A triangle containing a beckoning monster, and a few others that may lurk within.

A wooden box suspended in the air by a rope, and an axe with Ropecutter etched into the blade.

A rope bridge encountered within the second Deathtrap Dungeon, asking for a toll to cross.

A dog-headed statue crafted from bronze with the second Deathtrap Dungeon.

A smiling face and a scowling face upon a door iin the second Deathtrap Dungeon.