A Life-Stealer is a winged humanoid that preys on other creatures, especially Humans.[1]

None know for certain which god crafted the Life-Stealers, although the only clue is the occasional pendant worn by them, expertly crafted out of gold into the shape of a skull with a circular mouth, as though blowing outwards - the symbol of the Storm God Sukh.[2] These pendants are worth far more than their mere value in gold to any sage of note, though few will ever get their hands on one.

This has led some to suggest that they number among his prized servants, though this poses a problem for many philosophers and priests, since Sukh is not an inherently Evil deity, whilst these supposed servants of his delight in gratuitous violence and devouring Human flesh. Life-Stealers have been described as " a truly evil race despite the Neutral aspect of their lord", Sukh.[1] Some sages believe Life-Stealers are an innately violent species that commit violence and killing simply because of "the way they are."[3] Others believe that Life-Stealers fought for Sukh during the First Battle, but were partially corrupted as a result.[4]

Life-Stealers dwell high in the mountains of Titan, in small groups of two or three.[5] Large numbers of Life-Stealers are known to dwell in the High Xamen region of Kakhabad.[6] It is not known how they reproduce - if they do at all! - for none have ever seen a young Life-Stealer in their raids on isolated farmsteads and hamlets, nor returned from the lofty peaks to tell of what they saw in the lair of these beasts. For whilst Life-Stealers are rare, dead ones are rarer still, and they usually get what they came for - a feast of Human flesh.[2] 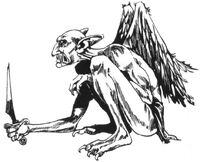 A Life-Stealer is a sinewy humanoid with large, feathery wings and a mouth brimming over with long fangs, and lifeless orbs for eyes that belie great intelligence and cunning, ceaselessly tuned to the search for more fresh meat. Their senses are particularly keen, with long, bat-like ears and large noses, and despite their scrawny frame they are inhumanly strong and more than capable of carrying a fully-armoured warrior back to their caves after his death. Life-Stealers wear clothing and carry daggers, meaning they are intelligent enough to create items.

The beating of a Life-Stealer's wings is said to be timed to create a "rhythm of death" when it is raiding with others of its kind, though the reason for this is unknown. It may be nothing more than coincidence, or it may be designed to terrify their prey long before they even swoop down upon them.

Life-Stealers do not have any special abilities barring the power of flight.