Out of the Pit

"Out of the Pit" was originally a bestiary of Fighting Fantasy monsters within the pages of Warlock magazine, contributed by various authors and readers throughout the issues. This section (which had the same name as the book) soon proved so popular that in issue 3 a "Monsters Book" was advertised as being in production. In issue 4 the book was again advertised as being in production with a working title of Out of the Pit: The Fighting Fantasy Book of Monsters. At around the same time as issue 5 was published, so too was the book Out of the Pit in 1985, which featured creatures from the books that had been published to date plus all creatures that had appeared in this section of Warlock, as well as some new creations from the mind of Marc Gascoigne.[2] The section continued to appear in Warlock beyond the publishing of the book, thus there are some creatures that appear in the "Out of the Pit" section of the magazine, that do not appear in the book.

The bestiary was written by Steve Jackson and Ian Livingstone and edited by Marc Gascoigne. The impressive A4 version boasted a highly acclaimed cover illustration by Christos Achilleos featuring a horde of undead, Demons and Dragons advancing.

The introduction to the book mentions that the monsters populate the world of Titan. This appears to be the first time that Titan is referenced as the world of Fighting Fantasy. It also confirmed that Allansia and Kakhabad are separated by the ocean, and therefore there were at least two land masses. The existence of a third continent was not apparent at this point - the only previous link between Allansia and Kakhabad is found in the description of the ZIP spell in the Sorcery! series, which requires a Ring of Green Metal mined under Craggen Rock.

The Creatures of Allansia and Beyond[]

The monsters are arranged alphabetically. As stated, almost every opponent encountered thus far in the Fighting Fantasy series is present plus some notable additions.

Besides a skill and stamina score they are given a habitat, number encountered, type, reaction and intelligence rating and/or description.

Additionally there is a "number of attacks" rating. Rather than referring to the number of blows a monster/character can produce in one round, it refers to the number of opponents the monster can handle and injure at one time.

For more information on each of the statistics above, see Fighting Fantasy Statistics

One criticism of the book was that it was questioned whether people would look up a specific creature in Out of the Pit for guidance when they ran into it in one of the Fighting Fantasy books.[4] However, the additional statistics over the basic skill and stamina are a clear indication that the book was intended for the furtherance of more advanced role-playing, and indeed the book did become part of the Advanced Fighting Fantasy system.

The descriptions are concise and give the reader a more detailed understanding of the background of the creatures. 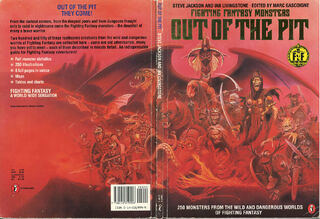 The original cover of the book was designed and illustrated by Christos Achilleos.

The cover in the first two instances was a complete wraparound cover, with the illustration covering the back cover as well, although in the case of the smaller B Format version the illustration was interrupted by the spine. The 2011 reprint saw the art shrunk to fit the front cover only.

The interior illustrations were by various artists. Each monster description is followed by an illustration. And many of the most well known Fighting Fantasy Artists are represented here as the majority of drawings are from the gamebooks. However, there are some original illustrations as well.

In the original Puffin large edition, eight colour illustrations were included by:

Note that illustrations from other gamebooks that were used in the original English language edition are not noted here as "additional material".

An in-character introduction by Gereth Yaztromo.[7]

The cover was designed and illustrated by Jidus. The back cover was by John Blanche and was originally used as the cover of Kharé - Cityport of Traps.

The books was illustrated by various artists.