They prefer to inhabit small cave systems or abandoned dungeons in wild areas of the world, and will usually be encountered sprawled across the top of a large pile of treasure,[2] for Red Dragons are the greediest and most paranoid of the Dragons when it comes to hoarding. This makes it even more difficult for a Conclave to be assembled,[3] since it is almost impossible to drag a Red Dragon away from its hoard unless it is looking to augment it.

The typical Red Dragon will rarely grow much larger than about 24 metres long, being the smallest of the Dragon races, and their scales are a brilliant red. They are very similar to Gold Dragons, with short horns and spines around their head and down their back, although some are known to have very large or elaborately curved horns. The reason for this is unknown.

As with all Dragons, their wingspan is easily that of their full length, and their tongue is not forked, which is a common misconception. However, their eyes are still dangerous to look into without permission,[4] as they can easily hypnotise a man or crush his spirit. 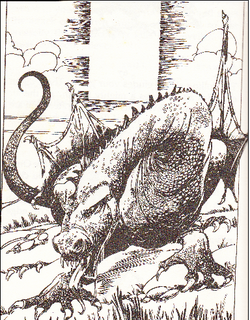 A Red Dragon has fire for its breath, using it every other turn in the form of a highly accurate fireball that is extremely likely to hit any target up to 25 metres away. The fireball of an Adult Dragon will scorch away 4 stamina points, but the breath of a Young Dragon will only cause 2 stamina damage, provided the victim fails a "Test for Luck".

The majority of Red Dragons can speak several languages, of both humanoid and animal races, and many Adults are apt to have some magical ability also.