A Rhino-Man is a warlike humanoid with the head of a Rhinoceros.

It is believed that the original Rhino-Man was created by an insane sorcerer (Some say Marrangha)[1] several centuries ago, but rebelled and killed him. What is certain is that they are fairly rare creatures and rely more on physical rather than intellectual strength throughout their lives, serving as formidable and loyal guards to those who can afford their services.

Rhino-People are most common in the wildest regions of Allansia, such as the Flatlands, the Moonstone Hills and the Plains of Bronze and of Bones. It is unknown whether or not there are any Rhino-Man in the Old World or Khul who did not emigrate there from Allansia.

The typical Rhino-Man stands just short of three metres in height, if one includes the distance by which their horns rise above their heads. They are humanoid, with incredibly thick grey skin and a rhinocerine head, complete with ears that can be moved independently of each other, small pig-like eyes and a pair of horns on their snout.[2][3]

They have three fingers and a thumb on each hand, and their feet possess only vestiges of toes, being largely little more than a mass of muscled flesh. Rhino-Men in general are incredibly strong and skilled warriors, though their general clumsiness and surly natures make them poor soldiers unless tutored from birth. They are not inherently Evil, however, just temperamental. Some Rhino-People are Good or Neutral.[3]

Rhino-People speak their own distinct language, Rhino-Speech; some also speak the Common Tongue. Rhino-Men sometimes leave their villages and travel across the land, seeking employment. Rhino-Men often work as soldiers, dockers in ports, "bouncers" for inns, or even Adventurers.[3] Other members of the species (Adult Rhino-Women, and young Rhino-People) are rarely seen by outsiders.[3] Rhino-People worship the god Fourga; it is not known if they also have a deity in the Animal Court.[3] Rhino-men were known to domesticate Rhinoceroses for use as battle-steeds, though it was rare for a tribe to have more than six such beasts.[4]

Rhino-Men have no special abilities. 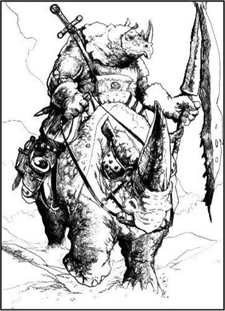