Titannica
Register
Don't have an account?
Sign In
Advertisement
in: Fighting Fantasy Monsters - Out of the Pit Entries, Blacksand Entries, Lesser Undead,
and 5 more

Skeletons are a type of Undead monster in the Fighting Fantasy world.

Skeletons are the Necromancer's staple source of walking dead servants; easy to animate and with the added bonus that they don't stink of rotting flesh like a Zombie. A Skeleton can be given simple instructions such "Guard this tomb" or "Kill intruders", which they carry out without question. Should the Necromancer who animated them be slain, then they will instantly collapse to the ground as a pile of bones they once were.

Skeletons are usually raised from human or humanoid bones, though animal or monster skeletons are known to exist as well. Stronger skeletons called Skeleton Warriors can also be created.

Edged weapons such as swords will only inflict one point of damage to a Skeleton (under the Advanced Fighting Fantasy rules, considering the variable weapon damage values, damage is automatically reduced by one point per hit). Blunt weapons such a war-hammer cause damage as normal.[1]

Two animated skeletons at the ready to attack. 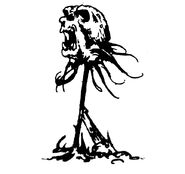 A skeleton's head wearing a helmet.

A skeleton buried within a desert.

The skull of a sea captain, lying within a bed of sand.

A skull upon a column, with two wooden balls on the floor.

Two skeletons in a room. One asks a riddle.