For other uses of Titan, see Titan (disambiguation)

The book reads in the style of a narrator and describes the people and places of Titan. In this sense it's not like any of the novels or spin-offs, its more of a collection of all the knowledge, traps, and people featured in all the Fighting Fantasy books written up to the point it was published in 1986.

The World of Titan[]

The Forces of Good[]

The Forces of Evil and Chaos[]

The Faces of Evil and Chaos[] 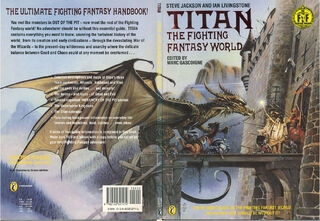 The original cover of the book was designed and illustrated by Christos Achilleos. The cover in the first two instances was a complete wraparound cover, with the illustration covering the back cover as well, although in the case of the smaller B Format version the illustration was interrupted by the spine. The 2011 reprint saw the art shrunk to fit the front cover only.

There is also a variation in the back covers of the 'B' format (1989) edition. The original wording used on the back of this book are shared by the first 6 impressions. The 7th impression dropped the paragraph "A mine of invaluable information is contained in this book. Make sure YOU are armed with a copy - now available in a pocket-size format." and replaced "FIGHTING FANTASY A World-Wide Sensation!" with "Fighting Fantasy - the world's most popular gamebook series."

The interior illustrations were by various artists.

Note that illustrations from other gamebooks that were used in the original English language edition are not noted here as "additional material".

An in-character introduction by Gereth Yaztromo.[6] This is accompanied by an illustration of Yaztromo by Bill Houston taken from Temple of Terror.

Several new illustrations alongside an illustration reproduced from Master of Chaos (David Gallagher).

This section includes "The Underwater Kingdom" section presented later in the book in the original English language edition. Several new illustrations alongside an illustration reproduced from Kharé - Cityport of Traps (John Blanche).

Several new illustrations alongside an illustration reproduced from The Shamutanti Hills (John Blanche).

This is entirely new material consisting of a campaign taking place in Lendleland and Analand written by Inabadreams.

Additional new material consisting of a description of goddess Lunara and the powers of her priests, new spells, new skills and talents, new items, and new horse rules. This additional material was written by Paragraphe 14, Krull and VIK.

The cover was designed and illustrated by Jidus. The back cover was by John Blanche and was originally used as the cover of The Seven Serpents.

The books was illustrated by various artists.

For Tony, who deserves it, and Chetna, who doesn't[7]