There are a number of different Wizard Book Cover Formats for the Fighting Fantasy gamebooks published by Wizard Books.

For the 2002 relaunch there were two formats for the main series of books, the "Special Limited Edition" and the "Standard Edition". These two formats are then subdivided dependent on whether the book is a Sorcery! book or not. Also of note are the different boxset designs as well as other non-standard covers.

The first run of each book published by Wizard Books was marketed as a "Special Limited Edition". There were two versions of this, the main series based books and the Sorcery! based books, despite the fact that these two original series were merged into one series by Wizard Books.

Books Based on Main Series[]

Books Based on the Sorcery! Series[]

Although part of Wizard's main series, numbered according to when they were published, the Sorcery! books were differentiated in the cover design. The title on the front cover was not in silver but in gold. Also the name of the series Steve Jackson's Sorcery! was made prominent with the name of the book sitting below this in a smaller type. All of these elements, (author name, series name and book name) were in gold. In the "Special Limited Edition" this was embossed.

The Wizard Books logo for Sorcery! differed as well, but only in that it was gold not silver. This sat in the bottom right hand corner and in the case of the Sorcery! series, the number of the book as it appeared in the sequence of the Sorcery! series (as opposed to where it appeared in the sequence of the Main Series) was written in white type on top of the logo. In the "Special Limited Edition" the logo was embossed but instead of the words "Special Limited Edition" surrounding its circumference (as with the main series), the Sorcery! books instead had the words "Steve Jackson's Sorcery!" surrounding the logo circumference.

As with the main series, the spine had the title in a metallic finish and the back cover had the words "Special Limited Edition" across the top.

It should be noted that the original Wizard publications followed the model applied to the Main Series, detailed above, with the addition of a banner under the title proclaiming it to be a "Brand New Adventure".

The Wizard series was re-launched in September 2009 after a two year break with four titles, one of which was brand new (Stormslayer). The re-launch was accompanied by a redesign of the cover template, using a large "shield" motif within which a much smaller piece of artwork was contained. The books themselves were now presented in the slightly larger B Format as previously used on the Advanced Fighting Fantasy titles, with the Wizard Fighting Fantasy logo relegated to a spot on the lower back cover. The books were also renumbered.

Starting with Blood of the Zombies in 2012, Wizard Books brought back the full cover artwork of "Series 1", adding to it the non-uniform typeface for the title and green spines of the Puffin editions. Furthermore, they used a modified version of the yellow Fighting Fantasy logo.

As well as the "Special Limited Edition" and "Standard Edition", The Warlock of Firetop Mountain was also published as a shortened sample adventure in an issue of the Cartoon Network Comic (Issue 68:December 2003). The cover was as for the "Standard Edition" except that across the bottom it had a red banner with white writing saying "Sample Adventure".

Although published by Wizard Books, this version had the same wraparound cover as the very first edition of The Warlock of Firetop Mountain from 1982. Notably, it was also in hardback.

Although the boxsets are covered in their own article, the general format of the Wizard Boxsets is worth noting here because in the short time they have been publishing Fighting Fantasy material, Wizard have had two different styles of boxset.

The Original Boxsets were the following:

These were each published with artwork from the covers of the books they contained. 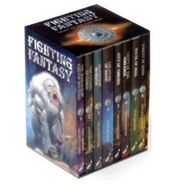 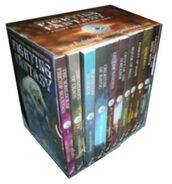 The same boxsets were re-packaged (with the exception of the ten book set) so that they all followed a standard format with the Wizard Fighting Fantasy Logo on the sides (silver for Books 1 to 4, Books 5 to 8 and Books 1 to 8 and in gold for Sorcery!). The only difference between sets, apart from the contents, was the main colour of the slipcase, as follows:

The words "Fighting Fantasy" were also on the sides of the slip case, in silver, except for Sorcery! where these words were replaced with the "Steve Jackson's Sorcery!" logo.

It is worth noting that a set of the first ten Shield Format books was released, bound purely in clear plastic and sold by the "The Book People" in 2010. 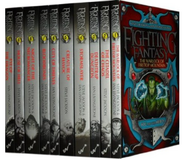